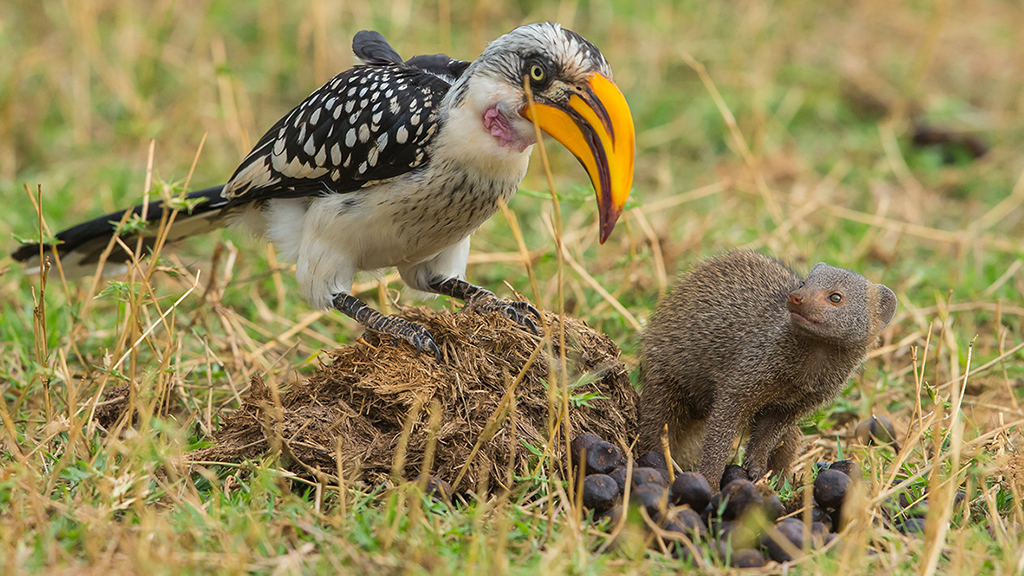 Dwarf mongooses (Helogale parvula) are energetic little hunters of small creatures, living mainly in semiarid warm regions of East Africa. In the Maasai Mara they are found, too. They belong to the family Herpestidae (mongooses), which are by far the most numerous carnivores of the Serengeti ecosystem. Scientists guess, that in the Serengeti about 160 000 mongooses occur (three species). They feed on many an insect and their ecological impact is certainly very big. Their family units are often accompanied by hornbills and there is a good reason for that.

The small hunters live in family units of up to 20 animals, with only the dominant pair breeding. Every family unit has a territory of a couple of ha, which is furiously defended and marked with gland secretions. Dwarf mongooses have a big problem: They are hunted, too, particularly by numerous birds of prey. Younger males thus spend much of their time looking out for predators, thus reducing their own foraging budget.

So, it is quite clever, to engage a good watchdog! In the semiarid thorn bush, basically all dwarf mongoose groups live with hornbills. These birds catch insects on the ground and that is much easier, when they follow the groups humming with activity, scratching, and digging most of their time. Many disturbed insects try to escape and are easy picking for the birds.

The mongooses don’t mind such losses: The different hornbill species are all well adapted to spot any raptor flying by. Their alarm call sends the mongooses instantly down the next termite mound. These “bodyguards” are well worth some morsels and birds and carnivores have a true “win-win-deal”. In ecology, such relationships are called mutualism.