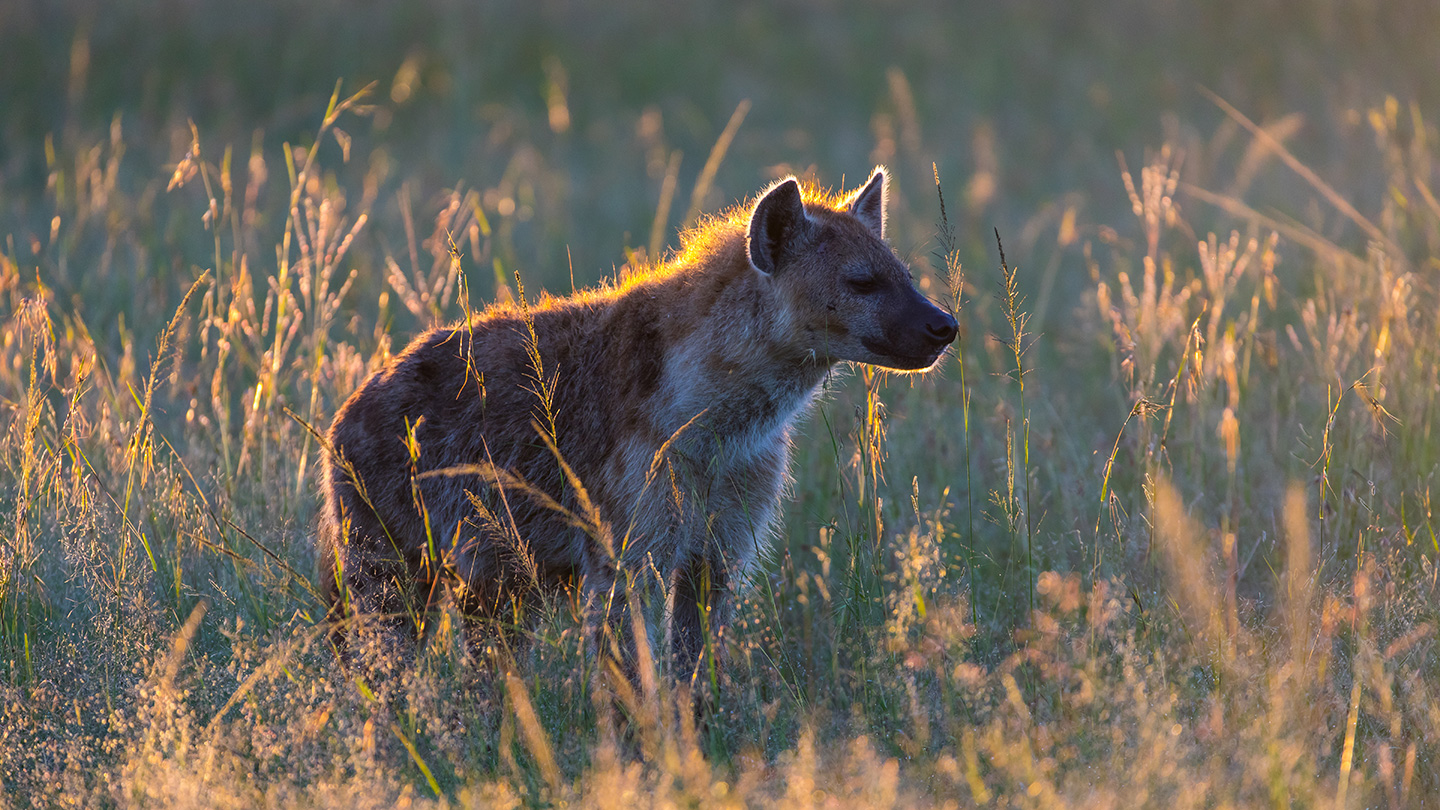 To many people hyenas (in this article I talk only about the spotted hyena, (Crocuta crocuta)) are not very attractive animals. Finding them in early morning fighting noisily over a carcass, most visitors leave them with the impression of having watched scavengers, squabbling over scraps left by the big cats. It seems to be impossible to change that opinion, although Hans Kruuk has proven already 50 years ago that spotted hyenas are the most important predators in the Ngorongoro crater and in most parts of the Serengeti. There, often it’s the lions, stealing from hyenas!

Spotted hyenas have a very complex social life, which I will deal with in a separate column later. Here, it’s just about their hunting skills. The tactics employed could not be simpler. Completely in the open they walk towards potential prey and are allowed surprisingly close! Probably because they are not seen as “hunting” when walking so relaxed. Only females with young keep their distance, with good reason. Often, hyenas approach groups of antelopes alone or in pairs. Suddenly they lope forward, making the prey run. This might go on for some time, until the hunter gives up or starts to chase in earnest. For an observer it is difficult to say why suddenly they decide to attack. They might have seen any sign of weakness in the way an animal runs, or spotted a calf, which is not closely attached to a mother. The targeted individual is then chased relentlessly for up to five kilometers.

In relation to body size, spotted hyenas have the biggest hearts of all African predators. That gives them a stamina which is far beyond the capabilities of lions or cheetahs – and beyond the limits of ungulates, too! After selecting an individual, it will be hard for it to escape. Hunting success rates in hyenas are in the range of 30 to 40 percent, and thus higher than in lions.

Of course, hunters make it generally as easy as possible for them and look for young or incapacitated animals. But when prey gets scarce, hyenas might even attack fully grown buffalos (personal observation)! Most hunts take place when it is cool, at night, at dusk or dawn. That is to be expected with such strenuous tactics. But hyenas are unpredictable: one day I observed a hyena chasing a Thomson gazelle in the midday heat. The gazelle looked pretty healthy and it was not clear, what triggered the attack. The chase ended after three minutes watching (I didn’t observe the beginning of the hunt).

Hyenas have no killing bite as lions or cheetahs to stop potentially dangerous struggling of the victim. On top, their slender legs, made for long runs, carry no sharp claws to give them a good hold on a prey animal. For all this, the killing of their victims is a cruel drama, nothing you would like to watch. They open the belly, leading to severe bleeding which finally kills the prey. Victims look rather like in a state of shock and offer little resistance. When other hyenas join in, the prey dies usually in a few minutes.

Hyenas might hunt in big packs, but more often single animals go out hunting, selecting a victim and starting a chase. Sometimes other hyenas join them to bring prey down together. However, if prey is rare, hyenas form regularly big hunting groups in the evening to go for bigger prey, like zebras. Or they might try to isolate buffalo calves from the herd. In fact, when the migration has left the Mara, buffalo calves form a great part of hyena’s diet!