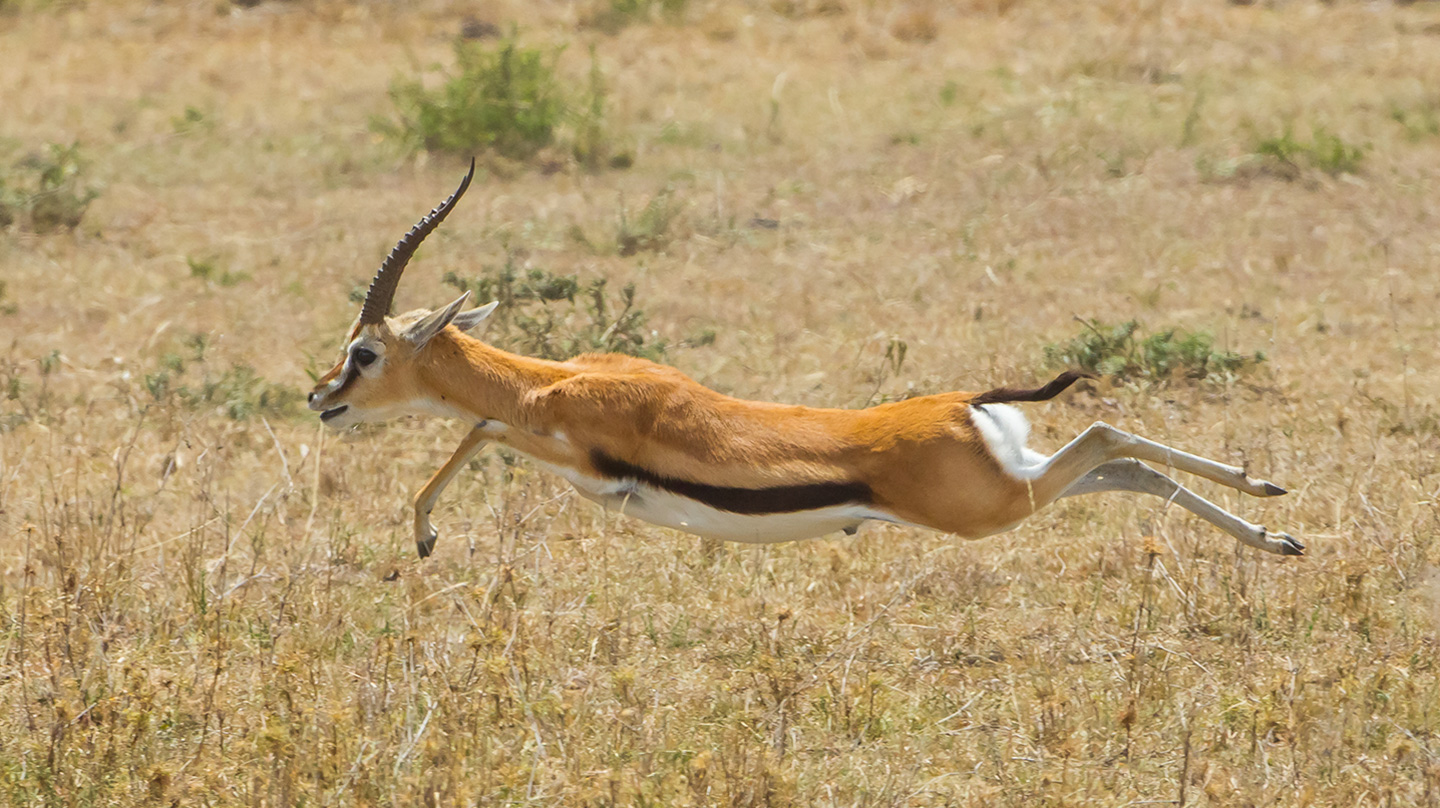 Thomson’s Gazelle: Anything but ordinary

What is then, a Thomson’s gazelle? According to some experts, they should be called “red-fronted gazelles”. In that case, the Thomson’s would only be the subspecies Gazella rufifrons thomsoni. Precisely the species that explorer Joseph Thomson found during his expeditions to East Africa. The main area where rufifrons gazelles occur is in the Sahel zone, where seven further subspecies exist, spread from West Africa to Sudan. The species in the Serengeti ecosystem (thus in the Maasi Mara, usually called Gazella thomsonii) are referred to in some newer nomenclatures as Eudorcas thomsonii. The range of these animals has, incidentally, no connection with the much larger gene pool of the rufifrons group from the region south of the Sahara. So far, so confusing? Exactly, even everyday animals can be deceptive.

Back again to the standard concept of Thompson’s gazelles as preferred cheetah meals: Some disappointed observers have concluded after a pursuit by the sprinter that: “The buck was lucky this time” when the spirited cat breaks off the chase and a pale yellow shadow disappears in the grass. Well, it’s not only luck: Tommies are hardly slower than their renowned pursuers. This fact has been repeatedly underestimated. No one knows, to be quite honest, how fast the cheetah really is in broken terrain (despite the jubilation about record-breaking, that one can read about). For this reason, the Tommies can certainly be glad that their speed has always been underrated. They can do up to one hundred kilometers per hour – at least when one concedes the awesome cheetah the same speed. Often enough, the Tommies can simply run away from the record-holders, depending on tactics and terrain.

With their narrow muzzles, the graceful gazelles are predestined as “selective grazers”, who purposely graze on shorter grasses. Therefore they don’t feel comfortable in higher grass. Following the rainy season in the Maasi Mara, there are huge areas of nearly meter-high grass where no Tommies are to be found. Only after buffalo, wildebeest and zebras have “mown” these fields, will they be used by the scurrying small-mouths. In the Serengeti, this has been described as “grazing succession”, but should not be taken too literally. The Tommies are quite adaptable animals, which are found in a wide range of habitats – especially in relatively dry savannas. Their feeding preferences incidentally, have led to the circumstance that the gazelles often occur on Maasai grazing lands.

In the Serengeti, they have been found to have extensive seasonal migrations. They move from the southern rainy season ranges below the Ngorongoro Crater to the grassy plains of the western Serengeti along the Grumeti River. The population in the Mara migrates as well – but the whereabouts are just not well known. Areas north of the Mara are now so densely populated, that it is getting to be tight there even for the slender gazelles.

As said, you will be missing something when you pass over these agile beauties while searching for the big cats. The graceful, horned creatures are charming photographic subjects when you take the time to look into their biology and behavior.